I’m blessed to have people in my life who are thoughtful enough to indulge my love of lighthouses.  Through the years, I have received replicas of lighthouses, a lighthouse picture now hanging on a wall at home, and other gifts representing my fascination with these aids to navigation.

Today, a co-worker presented me with a magnificent picture of Montauk Lighthouse in Long Island, New York.  Montauk was authorized in 1792, by the Second Congress under President George Washington.  Immediately, I knew that I had to add Montauk to my list of lighthouses that I want to visit. 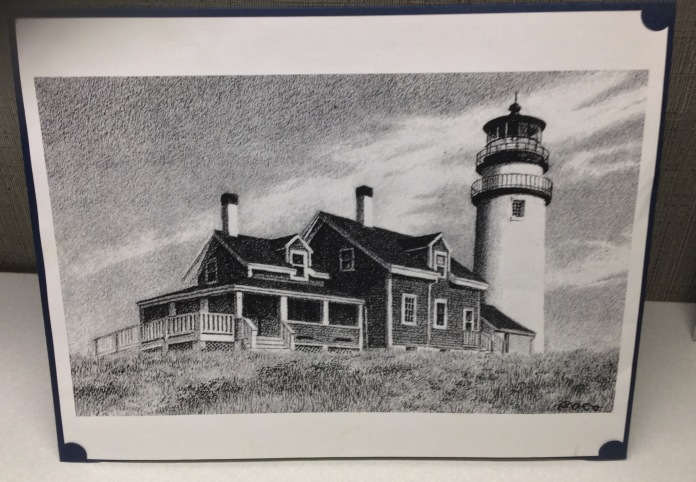 Above: A picture of Montauk Lighthouse I received from a co-worker today.

Last year, another co-worker presented me with a specially made lighthouse pillow featuring lighthouses in Bermuda, Nova Scotia, and other locations.

Also last year, another co-worker randomly found a 2016 lighthouse calendar, thought about me, and bam! I had another lighthouse gift to add to my collection.

How sweet it is to be surrounded by such amazing people. Some of whom may not be lighthouse afficianados themselves, but often bless me when they find a lighthouse item they think I will enjoy.

I’ve just come from a a brief trip outside, watching the snow fall as we take another pounding from Mother Nature.

And I can’t help but think of better weather days, and planning my next lighthouse adventures.

With the snow already here and freezing rain on tap later, I’m thinking back to my tour of ten Chesapeake lighthouses last September.

Such an exhilarating feeling to be on the open waters of the Chesapeake, onboard the MV Sharps Island boat, indulging in my fascination of lighthouses.

What will this year’s lighthouse adventures hold?  I can’t wait for the weather to break to find out!

Above: The approach to the lighthouse.

Above: My view of Sandy Point lighthouse on September 19, 2015, from the MV Sharps Island boat.  Sandy Point has fallen into disrepair over the years, but is being restored.