Oh snow.  You deceptive thing.  Always fooling us with your beauty as you first begin to fall.  Until we realize the mess you have left in your wake.

I have a special affinity for Absecon, as it is the first lighthouse I ever visited and climbed. It is the place I spent my birthday for two years in a row, and hope to celebrate more birthdays there.

Above: Video of Absecon Lighthouse on September 20, 2014. 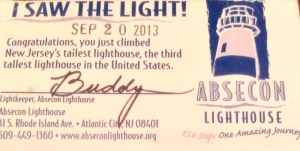 May you keep shining brightly.

My view of Absecon Lighthouse at night on September 19, 2013.

END_OF_DOCUMENT_TOKEN_TO_BE_REPLACED

A gorgeous half moon provided the perfect ending to this day.

I love to start my weekdays like this; capturing a beautiful sky as the sun begins to rise. It puts life into perspective and is a reminder of all there is to be thankful for.

This was my view on the way to work this morning.

This Flash Back Friday #FBF post is dedicated to YOU, Drum Point Lighthouse!

When I visted Drun Point Lighthouse in September 2014, the tour guide explained that it was one of the few remaining screw pile, cottage style lighthouses in Maryland.

As we toured the inside of the lighthouse, I was enthralled by the replicas of the kitchen and dining areas, as well as children and adult bedrooms. I had a sense of how lighthouse families of past,  actually lived and set up home at Drum Point. 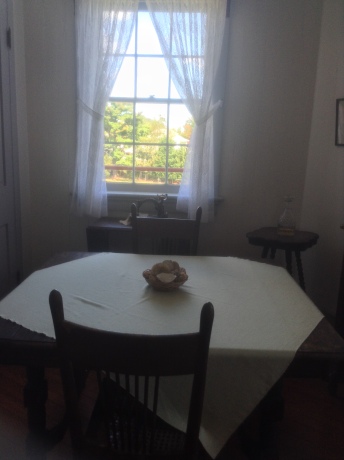 Above : The kitchen and dining areas inside Drum Point Lighthouse.

Above: The comforts of home inside Drum Point that give you a sense of how lighthouse families lived there.

I was also intrigued by a wall containing a plaque in tribute to Anna Weems Ewalt, who was born in the lighthouse on July 13, 1906.

If you’ve ever wondered how families lived inside a lighthouse, satisfy that curiosity and visit Drum Point Lighthouse in Solomons, Maryland!

It is a cold but beautiful start to this Tuesday morning. Capturing a gorgeous sky view on the way to work, helps me start the day just right! 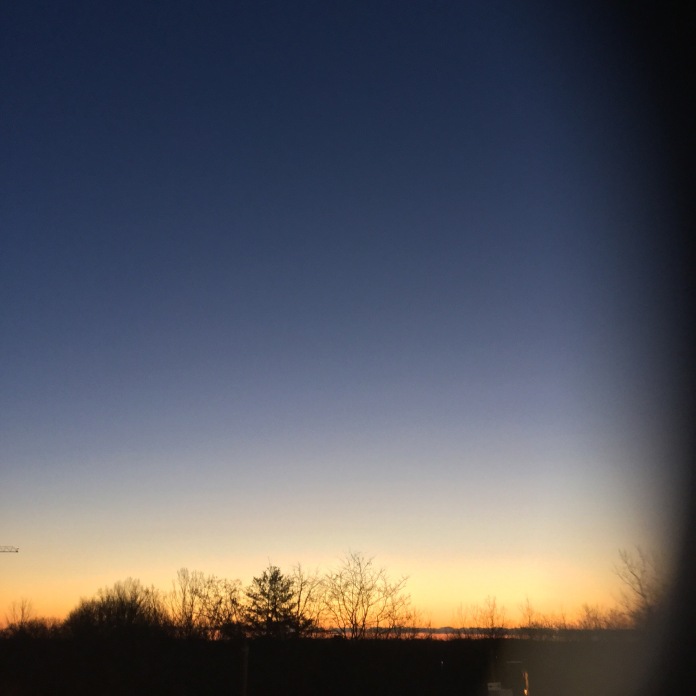 The Fresnel Lens was developed by French physicist Augustin Fresnel.

You can read more about the fresnel lens in the book A Short Brght Flash by Theresa Levitt: A Short Bright Flash

This was my view of the first-order fresnel lens at Absecon lighthouse in Atlantic City, New Jersey on September 20, 2014. 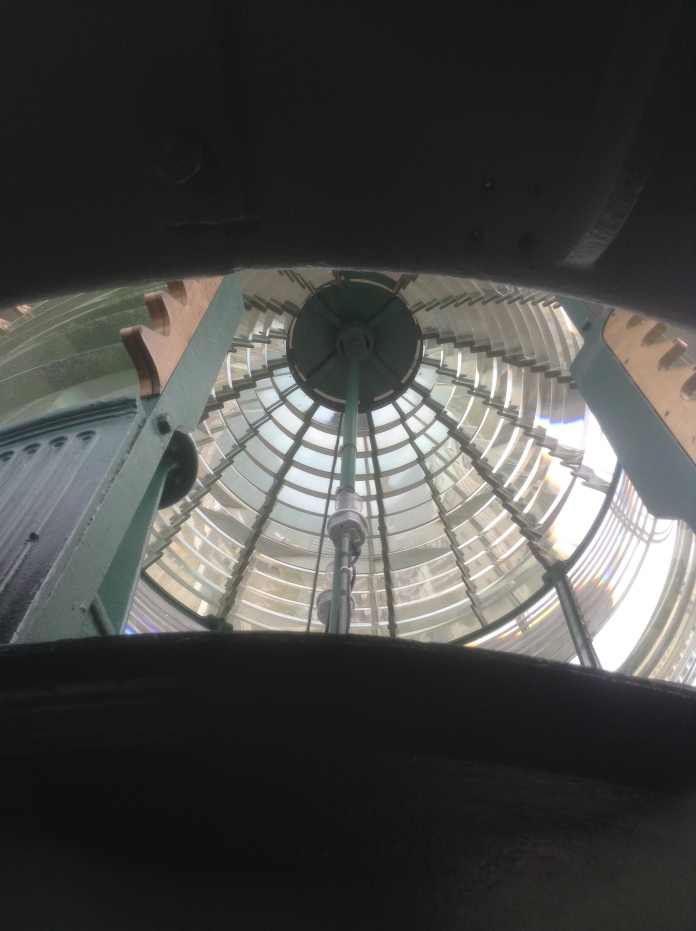 And this was my capture of the fourth-order fresnel lens inside the tower room at Drum Point lighthouse in Solomons, Maryland on September 22, 2014.

Finally, from inside the museum beside Drum Point lighthouse, a section dedicated to lighthouses and the fresnel lens.

My from lighthouse archives, video I shot featuring Absecon Lighthouse on September 20,  2014.

inside the lighthouse, on the first landing as I continued to climb Abby’s 228 steps:

Because I had only been to land-based lighthouses, I was determined that 2015 would be the year I would experience lighthouses in a different way.  On September 19, I embarked on a day-long cruise of ten lighthouses along the Chesapeake in Maryland.

Shortly after 8:00 AM, I arrived at the Knapp’s Narrows Marina & Inn in Tilighman, Maryland and boarded the Sharps Island Boat; the M/V Sharps Island.  At the helm was CAPT Mike, who has had the boat since 2002.  After a few minutes of explaining boat safety and what I and the other passengers could expect on this lighthouse tour, the adventure began!

Next, it was on to Thomas Point Lighthouse.  Thomas Point is the last screw pile lighthouse along the Chesapeake, that is still in its original location.

Stopping by Thomas Point Lighthouse on September 19, 2015 on the M/V Sharps Island.

Our third stop of the morning was Sandy Point Lighthouse, which is now privately owned and being repaired.

Baltimore Lighthouse was our fourth stop of the day.  It was the last lighthouse along the Chesapeake to be built, and is privately owned.

Next on the agenda was a stop at Tolchester Beach in Chestertown, Maryland for lunch at the Channel Inn Restaurant.  This also allowed for the opportunity to refuel the boat.

After lunch, we saw the remaining lighthouses that were part of the itinerary.

The fifth lighthouse of the day was Pooles Island Light.  CAPT Mike remarked that he could not get the boat too close to this particular lighthouse, because of a nearby shoal.  Merriam-Webster dictionary defines shoal as “a sandbank or sandbar that makes the water shallow.”

Bloody Point Lighthouse was the final lighthouse on the tour.  CAPT Mike noted that it was the scene of a terrible fire in 1960.

The approach to Bloody Point Lighthouse!

We returned to the Knapp’s Narrows Marina just shortly after 5:00 PM, after a beautiful, relaxed day spent on the waters of the Chesapeake, looking at 10 lighthouses, all different in shape, size, and the stories they held, from the Sharps Island boat.

To learn more about various tours of the Chesapeake lighthouses, visit: http://www.chesapeakelights.com/.

The next morning, September 20, I capped my birthday weekend’s lighthouse festivities with a visit to Cove Point Lighthouse in Lusby, Maryland.

Cove Point is Maryland’s oldest, continuously operating lighthouse. Because it is still an active aid-to-navigation, those visiting the lighthouse are not permitted to go to the very top of the lighthouse to the tower room. During my visit, it was explained that we could stand at the base inside the lighthouse and look up at the spiral staircase.

It was an extremely windy day at Cove Point Lighthouse.

Although I was visiting Cove Point Lighthouse independently, it was exciting to see others who were there as part of Maryland’s Lighthouse Challenge Weekend, during which participants are encouraged to visit as many lighthouses in Maryland as possible, during the challenge weekend. Inside the Visitor’s Center on the grounds of Cove Point, many of those participating in the Maryland Lighthouse Challenge Weekend were getting their lighthouse passport books stamped, marking their visit to Cove Point.

As 2015 winds down and I reflect on my year, I am thankful for the opportunity to have experienced lighthouses in a different way by participating in a boat tour of 10 off-shore lighthouses along the Chesapeake, and also continuing my visit to land-based lighthouses such as Cove Point.

I am enriched by each lighthouse experience I have, and always come away eager for the next!

You can read it at:

Standard
By The Dawn Of The Light
Blog at WordPress.com.
Loading Comments...